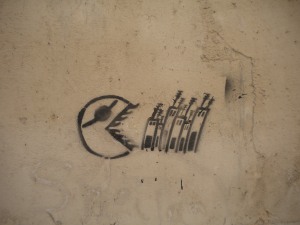 Deleuze theorizes the mind-body relationship as the event, and argues that it will be through the event that capitalism may be challenged and resisted. According to Paul Patton, Deleuze’s philosophy of events owes much to the Stoics’s dual conception of being and to Elizabeth Anscombe’s philosophy of action. The Stoics believe that “being” consists of a material component and an incorporeal component. One “is” in the world because, first, one lives the world through the body (the material component) and, second, one expresses those bodily events through language (the incorporeal component). Anscombe is also interested in the relationship between the body and the mind. She links actions (the acts of a body or a body politic) to the mind via intention because, as Patton explains, “actions involve intentions and intentions presuppose some description of what it is that the agent intends to do” (“The World Seen From Within”). Descriptions of the same action may vary depending on who is doing the describing. It is logical to assume, then, that “new forms of description of human behavior make possible new kinds of action” (“The World Seen From Within”).

Thus, imagination and art are inextricably linked to politics. A case in point: The above-displayed urban art describes the project in Valencia to extend the Blasco Ibáñez Avenue to the sea as one driven by property speculation that will lead to the destruction of 1,651 homes in the historic Cabanyal neighborhood. In addition to urban art, many neighbors have used other forms of creative activism to mobilize public opinion against the project, most notably the Portes Obertes (Open Doors) art festival. During this annual event, neighbors invite artists to display their paintings, sculptures, and video installations in their homes and then open their doors to the general public. By allowing people to see and experience the charm of the Cabanyal neighborhood and to meet the owners of the homes, this art project facilitates empathy for the plight of the neighbors.

In 2012, Carbanyal was put on the World Monuments Watch list.

In July 2012, the project to extend the avenue was halted and the neighborhood saved.

3 thoughts on “Deleuze and the Mind-Body Relationship”

This site uses Akismet to reduce spam. Learn how your comment data is processed.